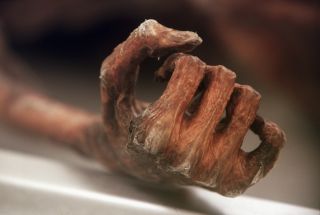 The mummified hand of Otzi the iceman, who died in the Alps some 5,300 years ago.
(Image: © Gianni GIANSANTI/Gamma-Rapho via Getty Images)

When Ötzi the Iceman died 5,300 years ago, he went to his final resting place alongside at least 75 species of mosses and liverworts. Now, new research finds that this seemingly unassuming flora reveals the details of Ötzi's last journey.

Some of the species found entombed in ice with the famous mummy are known to grow at the elevation where Ötzi died. Others were likely carried there by animals such as the alpine ibex. But the Iceman also brought some species with him, both deliberately and inadvertently, according to the new paper published Oct. 30 in the journal PLOS ONE. Many of these species grow in the nearby valley of Schnalstal in the Alps, suggesting that Ötzi made his final trek to the high mountains through this valley.

"I'm convinced that what I've done is as near proof as you're going to get under present scientific know-how that he went up Schnalstal rather than other adjacent valleys," said study co-author James Dickson, an archaeobotanist who is retired from the University of Glasgow.

Related: In Photos: A New Face for Ötzi the Iceman Mummy

The natural mummy now known as Ötzi was first discovered in 1991 by a pair of German tourists who were hiking in the Ötztal Alps, a mountain range on the border of Austria and Italy. The body was incredibly well preserved, making it possible to reconstruct a boggling array of details about the Iceman's life, from what he was wearing (clothes made of leather and hides, a cloak woven from grass) to what weapons he used (a dagger and arrows, recently sharpened). Archaeologists have also found that Ötzi's death, at around age 45, was violent. He had head trauma, a deep cut to the bone between his thumb and forefinger, and an arrowhead lodged in his left shoulder. That arrow wound likely caused the Iceman to bleed to death.

Related: 9 Secrets About Ötzi the Iceman

Dickson began analyzing mosses and liverworts from the Iceman site in 1994, at the invitation of colleagues from the University of Innsbruck.

"There were dozens of little vials and one of the vials looked very black, very dark brown, and that was because it was absolutely stuffed with moss," Dickson told Live Science. "I thought, 'I'm going to look at that first,' so I got a pair of tweezers and gently pulled the moss out of the tube and I knew what it was before it was even out of the tube."

It was a moss species named flat neckera (Neckera complanata), a species that never could have grown at the cold, icy elevations where the Iceman was found. Microscopic bits of flat neckera were also found in the Iceman's digestive tract, a puzzling discovery, as moss is not palatable or nutritious, Dickson said. Also puzzling, he said, was the discovery of tiny flecks of bog moss in the mummy's digestive system.

Most likely, Dickson said, Ötzi didn't mean to ingest these mosses, but he did mean to carry them with him. The absorbent bog moss may have been medicinal, used to staunch the blood from the Iceman's gruesome hand wound, which was likely a day or two old when Ötzi died. The flat neckera could have been used to wrap meat from the alpine ibex or red deer that was found in Ötzi's gut.

From the time of Ötzi's discovery, there has been debate over where the Iceman came from — north or south? Pollen grains found in the mummy's stomach reveal that the man had eaten food at an elevation of around 3,280 feet (1,000 meters) about 36 hours before he died; his body was found far higher, at 10,320 feet (3,210 m). He had clearly been roaming in his last days, but from where?

Some of the low-elevation mosses, likely carried by the Iceman to the high mountains, provide a clue. Dickson and his colleagues examined the distribution of five low-elevation mosses found near the corpse: Anomodon viticulosus, Hymenostylium recurviostre, Neckera complanata, Sphagnum affine and Sphagnum teres. The most frequent habitat for all of these mosses is in the Schnalstal Valley, one of the valleys leading up to the high-elevation spot where the Iceman was found. In particular, Sphagnum affine is found in the Vinschgau Valley bottom, the valley below the Schnalstal, suggesting that Ötzi could have been wandering as low as 1,969 feet (600 m) in the days before his death.

Researchers are still studying everything from the Iceman's fatal wound to the contents of his belt pouch, but the new paper is Dickson's definitive summation of the 200 samples of moss taken from the site. The piece is the first statistical analysis of the samples, he said, but also a summary of all the work done since the 1990s.

"lt's my last will and testament, so to speak," Dickson said.