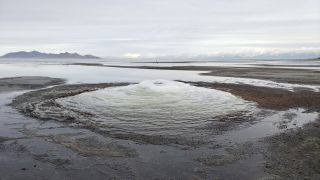 Mirabilite deposits are often found beneath the waters of the Great Salt Lake in winter, but this is the first time the mineral has formed exposed mounds above the surface.
(Image: © Courtesy Utah Geological Survey)

Rare mounds of a crystalline mineral have emerged above the surface of Utah's Great Salt Lake, where they're expected to remain just a few months before disappearing again.

Scientists think these mounds may be similar to mineral structures on Mars that could preserve traces of  microbes that may have lived in the planet’s  saltwater lakes billions of years ago.

The four white mounds, which measure up to 3 feet (1 meter) high and dozens of feet across, were first seen near the southern shoreline of the Great Salt Lake in October by park ranger Allison Thompson, Utah State Parks representatives wrote in a blog post.

Thompson noticed that the mounds grew as the winter deepened, and she called in members of the Utah Geological Survey to investigate.

After taking samples for chemical tests, the state geologists determined that the mounds are layered formations of a mineral known as mirabilite, a crystalline sodium sulfate. The scientists think the mounds will remain only as long as the weather stays below freezing; in the spring, the mirabilite will dissolve in the warmer waters, and the mounds will disappear.

Mirabilite often forms beneath the salt-rich waters of the Great Salt Lake, but this is the first time the mineral has emerged as mounds above the surface, said Mark Milligan, a geologist with the Utah Geological Survey.

"There are mirabilite deposits every winter, but they are precipitating near the bottom of the lake," Milligan told Live Science. "They wash ashore, and you get these windrows [ridges] of white, slushy mirabilite."

Layered mounds of the mineral are usually seen only in Arctic regions, he said.

Geologists think the mineral precipitated from the salt water above sulfate-rich hot springs in the lake, which were gradually exposed as the lake level dropped due to the consumption of water elsewhere, Milligan said.

Mirabilite gets its name from the 17th-century German-Dutch chemist Johann Glauber, who discovered it in mineral waters from Austria, according to his own writings. He named the mineral "sal mirabilis" — Latin for "miraculous salt" — and it's since been known as "Glauber's salt." Mirabilite was once widely used in medicine, especially as a laxative.

Though mirabilite has not been found on Mars, scientists think ancient mound-like deposits of similar sulfate minerals might still contain fossilized traces of any ancient Martian microbes.

NASA reported in 2011 that the Opportunity rover had found sulfates on Mars that appeared to have been deposited by water, and the Curiosity rover recently detected signs of ancient saltwater lakes, Live Science sister site Space.com reported.

The temperatures on Mars, which average minus 80 degrees Fahrenheit (minus 60 degrees Celsius), also would be low enough to keep such minerals stable, Milligan said.