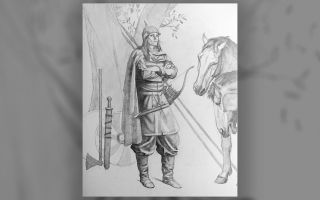 An illustration of what the female warrior may have looked like.
(Image: © Drawing by Tancredi Valeri; Copyright Antiquity Publications Ltd.)

The ancient warrior was given a prestigious Viking burial, complete with deadly Viking weapons, a bag of gaming pieces (possibly to represent military command) and two horses, one bridled for riding. This mighty warrior — long thought to be be a man — made headlines in 2017 when researchers in Sweden announced that the individual was, in fact, a woman.

The intense scrutiny that followed caught the researchers by surprise.

The barrage of questions from the public and other scientists was unrelenting: Were the researchers sure they had analyzed the right bones? Was there more than one body in the burial, of which one was surely a man? And if the warrior's sex was indeed female, is it possible they were a transgender man? [See Images of the Viking Woman Warrior's Burial]

Now, in a new study published online yesterday (Feb. 19) in the journal Antiquity, the researchers of the original study have reaffirmed their conclusion that this mighty individual was a woman. The new study addresses all the questions people raised, and more.

The late archaeologist Hjalmar Stolpe uncovered the burial in 1878 in Birka, a Viking settlement that flourished from about 750 to 950 in what is now east-central Sweden. The Birka site is surrounded by several cemeteries containing thousands of human remains and artifacts. But even in the 19th century, Stolpe knew that this particular burial was special.

It was nestled in an underground wooden chamber, and the body inside was fashionably dressed in Eurasian steppe-style clothing. The remains of a mare and a stallion, their legs tucked under them, rested at one end of the chamber. Sharp weapons surrounded the deceased: a sheathed sword, an ax, a fighting knife, two spears, two shields, a quiver of 25 armor-piercing arrows and a small iron knife.

Equally impressive was the bag of three antler dice and 28 gaming pieces, including a king piece marked with an iron nail, that sat on the deceased's lap. Moreover, the burial was the westernmost grave in Birka and was originally marked with a large boulder, which would have been visible to the settlement, the researchers said.

Stolpe assumed that a grave resplendent with so many weapons, and devoid of any female-associated artifacts (such as jewelry or weaving equipment), belonged to a man. But in the 1970s, an anatomical analysis of the bones suggested that they belonged to a female, and a 2016 analysis suggested the same thing. So, in the 2017 study, published in the American Journal of Physical Anthropology, Charlotte Hedenstierna-Jonson, an archaeologist at Uppsala University in Sweden, and her colleagues did a genetic analysis. They found that the so-called male warrior had XX-chromosomes and so was biologically female.

As soon as the deceased was revealed to be female, questions poured in. Here are some that the researchers, led by Neil Price, a professor of archaeology at the University of Uppsala, answered in the new study:

Did the scientists analyze the right bones?

Yes, and here's how they're sure. Each of the bones from the distinguished grave, known to archaeologists as Bj.581, is individually labeled with Bj.581 in ink, the researchers wrote. Even the horse bones and most of the artifacts are labeled with Bj.581, linking the majority of the grave's contents.

Stolpe also kept detailed notes and diagrams during the burial's 1878 excavation, and these match the labeled bones and artifacts, the researchers said. "Furthermore, no bones are present in the labelled remains that are not recorded on the field drawings," the researchers wrote in the study. [Photos: 10th-Century Viking Tomb Unearthed in Denmark]

Was there more than one body in the burial?

The short answer is no, but the researchers explained why this misconception exists.

In the 1970s, an osteologist, or scientist who analyzes bones, found that the box containing the Bj.581 contents had three femurs (thighbones). This sparked the idea that there were two bodies in the burial. But later research showed that this extra thighbone was actually labeled Bj.854, meaning that it came from another grave, the researchers said. (Plus, the Bj.854 bone is about a century older than the Bj.581 bones, a 1980 study found.)

In addition, the same osteologist tried to gauge the deceased's age by looking at the jaw and upper arm bone. However, she found that they produced different age estimates.

But dental wear can make age hard to pinpoint, the researchers wrote in the new study. So, they tested the DNA in the left arm bone and a left canine, finding that the two sources came from the same person, the researchers said.

Are you sure the deceased is female?

Yes, because a genetic analysis revealed that the bones had XX chromosomes. Also, anatomical analyses showed that the long bones are thin and slender, and distinctive features on the hip bones indicated that the individual is biologically female, the scientists said. She was likely between 30 and 40 years old when she died, they said.

Was this person really a warrior?

The warrior interpretation was never challenged until the deceased was revealed to be a woman, the researchers noted.

While the woman does not have any known injuries preserved in her bones, as other warriors who went to battle do, she was buried in an area that "reinforces a warrior interpretation — being situated outside the gate of the Birka hill fort and adjacent to two other burials containing numerous weapons," the researchers wrote in the study.

The functional weapons buried with the woman are also suggestive of warriorhood, but the researchers acknowledged that it's impossible to know if these items were actually her possessions or reflected her activities. For instance, perhaps these artifacts did not belong to her in life. Or maybe these objects conferred a proxy identity she never had while alive, the researchers said. Alternatively, she may have lived symbolically as a warrior. [Images: Viking Jewelry Revealed in Sparkling Photos]

But, in this case the most straightforward interpretation is likely correct: She was probably a warrior, the researchers said.

"Many other interpretations of both funerary treatment and gender are possible, but Occam's razor would suggest that to reach for them as a first resort is to attempt to 'explain away' what seems to be the most obvious and logical conclusion," the researchers wrote in the study. "In our opinion, Bj.581 was the grave of a woman who lived as a professional warrior and was buried in a martial environment as an individual of rank."

Was this person a woman in the gendered sense?

If this person was biologically female, what was their gender? That remains a mystery, the researchers said.

Since the 2017 study came out, both academics and the public have suggested that this was a transgender person, the researchers said. However, this interpretation is problematic, because "transgender" is a "modern politicized, intellectual and Western term" and cannot be applied to ancient people from different cultures, the researchers wrote.

That said, "there are many other possibilities across a wide gender spectrum, some perhaps unknown to us but familiar to the people of the time. We do not discount any of them," the researchers wrote. For instance, this person may have taken on a man's social role but retained her female identity.

The researchers added that this person may not be emblematic of Viking age sex and gender systems. Rather, the deceased is a case report, a single instance of a biological woman buried with warrior paraphernalia.

The new study is an improvement over the 2017 one, which had the rather sensational title "A Female Viking Warrior Confirmed by Genomics," said Judith Jesch, a professor of Viking studies and director of the Centre for the Study of the Viking Age at the University of Nottingham in England, who was not involved with the research.

The new study takes a more circumspect look, with the title "Viking Warrior Women? Reassessing Birka Chamber Grave Bj.581," which recognizes "the need for careful and judicious interpretation of the evidence and quite properly invites discussion and argument," Jesch told Live Science in an email.

Jesch commended the researchers for explaining how they identified the bones and for delving into the the identities of "woman" and "warrior" in the study. However, the authors "often make too much of rather slim evidence" — for instance, saying that the game pieces represent the individual's "command" status is speculation and not a slam dunk, Jesch said. And she would have liked to have seen more discussion about the "various 'Eastern' aspects of burial and the interesting ways in which this might complicate the authors' description of it as 'Viking,'" Jesch said.

When the 2017 study came out, Jesch published two blog posts critiquing how the researchers interpreted and discussed their results.  But "the authors have certainly improved the quality of their arguments in this new study," Jesch said.