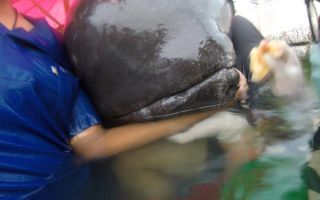 More than 80 plastic bags were found clogging the stomach of a small male pilot whale that died in Thailand on Friday (June 1), just days before World Ocean Day on June 8.

Veterinarians tried to save the whale for five straight days after spotting it in a Thai canal by the Malaysian border, according to National Geographic. When rescuers first spotted the whale, it was struggling to swim and breathe. So, rescuers used buoys to keep it afloat and opened red umbrellas to keep the whale from getting a sunburn.

Although the whale spit up five plastic bags, that wasn't enough to save it. A necropsy (an animal autopsy) revealed that it had more than 17 lbs. (8 kilograms) of plastic bags and other human-made trash in its stomach, according to Reuters. [Photos: Pilot Whales in Trouble off Everglades]

The whale likely mistook the plastic bags for food, said Regina Asmutis-Silvia, the executive director of Whale and Dolphin Conservation’s North American operation. As the bags piled up in its stomach, the animal would have felt full and may have stopped hunting for its natural diet of squid, fish and octopus.

"At some point, their stomach fills up with trash and they can't eat real food," Asmutis-Silvia told National Geographic. "You’re not getting any nutrients in, and you've basically completely clogged your digestive system."

This pilot whale is hardly the only creature that has mistakenly dined on plastic with fatal consequences. At least 300 marine animals die in Thai waters each year after gulping down too much plastic, Thon Thamrongnawasawat, a marine biologist and lecturer at Kasetsart University in Bangkok, told Agence France-Presse. Worldwide, seabirds also mistake plastic trash for food, as do turtles, other whales, dolphins, seal pups and tiny crustaceans living in the Mariana Trench, the deepest place in the ocean, Live Science previously reported.

Some 18 billion lbs. (8 million kg) of plastic waste end up in the oceans annually, according to National Geographic. In the United States, the average person discards 185 lbs. (84 kg) of plastic trash, but this number can be reduced if people avoid single-use products — such as plastic bags and straws — and by properly recycling plastic products.